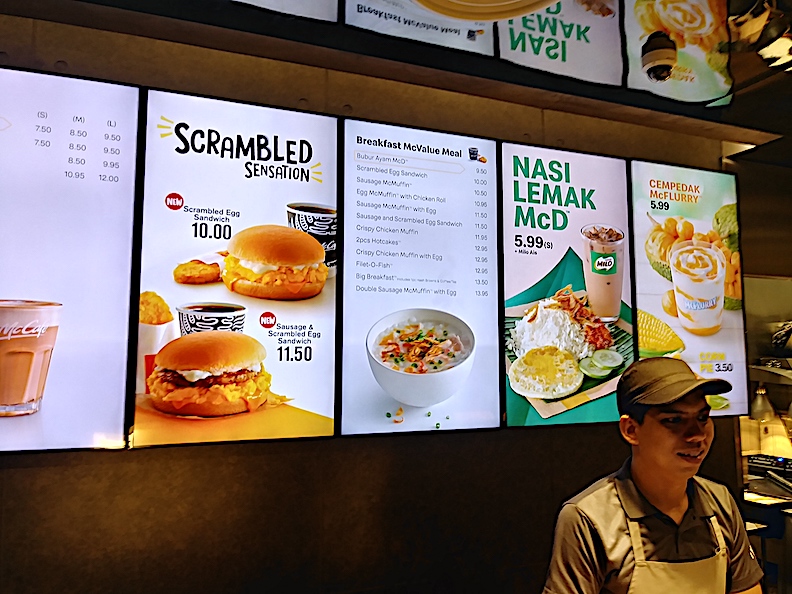 Let’s start with what’s the official food of Malaysia. It’s the Nasi Lemak which the exact meaning means fatty rice. The rice is boiled with coconut milk, pandan leaves and water which is served with Ikan Bilis ( a very small form of anchovies), quarter egg, sliced cucumber and the infamous hot sambal chili sauce.

I am sure that a lot of people are aware that rice is a big food staple in Asia but did you know that there is an aisle at the local Tesco (British Chain) Supermarket dedicated just for RICE.. yes, RICE…

Let’s start with an establishment majority of the world is familiar with… it’s Mickey D’s in Malaysia. Yes, believe it or not they serve nasi lemak with Milo which is cold a chocolate malted drink popular in Asia, Australia and some part of Europe.

Here is the non commercialized original Nasi Lemak from a permanent make shift stall out of zinc roof.

My mum and myself took a nice long 1+ hour drive just to eat the famous curry chicken Noodle in this little ex mining town called Seremban. My parents have been going to this same shop for the past 40 years and it has been managed by 2 different generations since they first started going there. Now the shop is owned by the owner’s aunt and the owner’s son and daughter.

From the same vendor, they also sell Roti Canai which is an indian influenced flat bread.

Next for you vegetarians…

from wiki
It is believed that the invention apam balik or 曼煎粿 is related to General Tso, who was a Chinese statesman and military leader of the late Qing dynasty.[6] In 1855, the army of the Taiping Heavenly Kingdom invaded the Fujian region and General Tso was appointed to lead an army to crush the rebels. In order to provide the soldiers with food without interfering the life of local people, General Tso decided to switch from the flatbread which was eaten together with spring onion and chilli sauce, to the pancake that used locally-sourced and mass-produced ground cane sugar and peanut as filling. The recipe for the pancake was spread throughout the Fujian region, especially in places around Quanzhou and later on throughout the whole Southeast China. It was also brought into countries in Southeast Asia by the Chinese Hokkien immigrants.[1]

5 thoughts on “Food of Malaysia”

This site uses Akismet to reduce spam. Learn how your comment data is processed.